What kind of superhero did you want to be when you were little? For me it was usually a toss-up between Sailor Moon and the Pink Ranger -what? I was a little girl in the 90's!- but eventually resigned myself to the fact that being a superhero probably wasn't a valid career choice and moved on with life.

But there are some people who don't let the fact that they weren't born in Eternia or inbued with the Power Cosmic stand between letting them do good in the world; these are the people of the Real Life Superhero Project- a collection of everyday people who don a superhero mark, helmet or cape in hopes of inspiring others.

None of these people can fly or have X-ray vision but they all do amazing things like give out blankets to the homeless, create neighbourhood partols to fight crime, form community outreach programs and teach children about tolerance and civility.

Check out an interview with them here:

This is really creative and imaginative way of reaching out to people, especially children. I know if a guy dressed as a superhero came and talked to me about tolerance and safety I'd be much more interested than if it were a regular police officer. There's always something so enthralling about the idea of a "superhero", and these people seem to have the right idea.

Besides wouldn't the thought of a masked vigilante in your neighbourhood watching over people and keeping them safe help you sleep a little better at night?

You can learn more about The Real Life Superhero Project by visiting their website.

4chan and the puppy-throwing girl

Well kids, looks like 4chan's /b/ board is on the hunt again.

Sipping my coffee this morning I sat at my desk in a fabulous mood until this article on Gawker nearly made me cry. Seriously. Seriously.

Watch the video if you want, but this is literally some of the sickest, most vile shit I've ever seen. I never, ever condone animal abuse and this is an intensely graphic video. What could ever bring someone to do something like this is beyond me.

So watch, but put down your McMuffin first because you might choke watching this.

So the video made it's way to /b/ with this comment: "Find this dumb little bitch and throw her into a river." 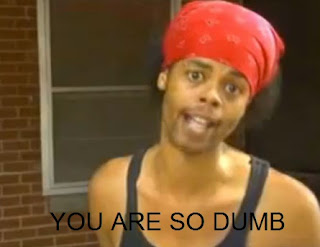 And you know what? I agree. Cat Lady from last week was one thing, but throwing puppies in a river? Are you kidding me?

Not only is it blindingly inhumane and cruel, but to make a video of it and put it up on youtube where anyone 4chan could find it is so dumb.

The article said they're in the process of zeroing in on the girl and outing her to the public; unfortunately this might not be a 24-hr job like Cat Bin Lady, but I'm sure that, as always, the defenders of Teh Internetz (and kitties and puppies!) will bring justice.

I know exactly why I walk and talk like a machine

Super, super tired tonight guys so instead you get a stupid vlog blurb of me talkin' some nonsense.

I need to do this more often to get some practice and not be so nervous (I'm also exhausted) so expect more of these in the future- ideally about more relevant things and without my sketchy-time shifty eyes.
Night dears, xo.
Tags: Uncategorized
Tweet Weekend was a great success as this photo and many Tweets from Saturday night made apparent. I spent more time taking photos with my iPhone than my SLR camera (they're just blurry due to wine and jello shooters, f'realz). I'm digging not just the ability to have a camera on-hand constantly but also the hi-rez quality of the photos. Have you seen the ones of the moon? Amazing!

Maybe it's my shiny new toy or that I start a whole new chapter in my amazing life next week when classes start but not even the super-gloomy weather can get me down today.

Booster Juice snack, run to the bank, play in some puddles in the rain.

Mostly she wasn't there

Saturday Ty and I got up at 7am and waited in line at the (only) Apple store to score ourselves some sweet iPhone4 action.

It's Baby's First iPhone and symbolized my ascension into the world of Adult Phones.

In light of this momentous event, here's a vid of me being shitfaced smashing my old flip phone to bits.
Yay.
Tags: Uncategorized
Tweet

Foodgasm.
Courtsey of Best Boyfriend Ever. From the POW! SOCK! BAM! action words to stupid Bat Utility Items to that horrible movie they made, the canned running scenes, Catwoman's sexy-as-hell costume, the never-ending flow of henchmen all the bad guys had, and Adam West in that ridiculous suit. I love it all.

Needless to say I was thrilled when I got to read an interview The National Post did with Adam West, Julie Newmar and Burt Ward about the original series and this kickass photo Steve Murray (@npsteve) did to accompany it.

It looks even better in print.

Yet another example of how 4chan are the defenders of Teh Internetz:

On Monday a video of a British woman putting a cat in a garbage bin as she walked by surfaced on YouTube.

Then They found it.

Rules 1 and 2 of The Internet forbid me from mentioning Their name, but They found her.

They found her name.
Her age.
Her place of employment.
Her boss.
Herphone number.
They Google Mapped her address and They posted up her FaceBook profile.

Understandably, she went under "official police protection" (not that she deserves any protection from the wrath of 4chan and the general public for tossing a harmless cat in a bloody garbage bin).

Honestly, after bringing down Kenny Glenn The Animal Abuser last year and bringing us Lolcats, Ceiling Cat, Long Cat and others, shouldn't people have realized that 4chan loves kittehs by now?

And if you fuck with them, Anonymous will find you and make you pay for it.

This is your time

Sam Katz kicks a kid in the face. Awesome.

There aren't really a lot of things that I can say that Winnipeg has that other cities don't.

But did YOUR mayor kick a kid in the face during a soccer game?