The Crowdfunding Crash Course is chugging along and I'm amazed at the overwhelming response from participants and readers alike - I'm learning so much, and am loving the journey of sharing interesting and innovative projects with all of you.

With that in mind, let's review some of the key themes that have emerged over the responses so far and see what we've learned: 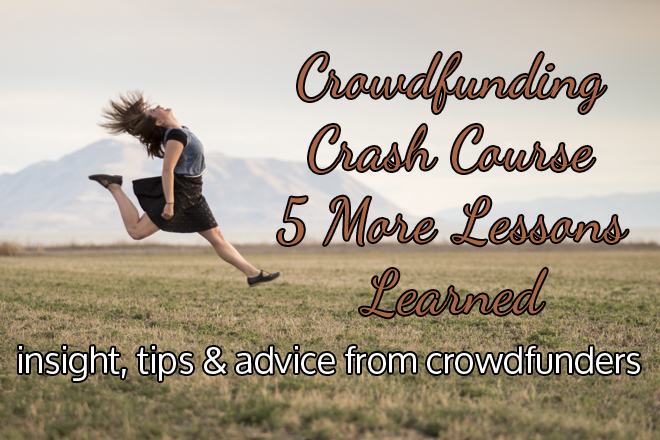 1. Organize your team before you start

Kelly Stacey of SoLight, who funded their product SolarPuff on Kickstarter, mentioned that keeping up-to-date with backer questions and special requests was especially taxing. "We had a lot of people asking a lot of questions and getting back to all of them (and we did) was very time consuming" she says, and she isn't alone: every single person I've interviewed has mentioned the tremendous level of organization required to run a successful campaign.

Randy Hoyt, who successfully funded two tabletop games, Relic: Expedition and Lanterns: The Harvest Festival on Kickstarter, took the first and last day off work to make sure that he was available to handle all questions and issues that might come up. "The first and last days of your campaign are the busiest" he says.

The takeaway: if you don't feel like you can handle the planning and execution of your campaign, hire someone or organize a team of people to help you with it. Even things as seemingly simple as responding to backer emails, or interview questions can take up a lot of time, and by delegating and being organized you can make sure you're focusing on what matters: making sure your project is fully funded.

2. Tap into your existing audience

Randy Hoyt from Foxtrot games use the momentum from their first tabletop game, Relic: Expedition to build momentum for their next game Lanterns: The Harvest Festival. They had an existing mailing list from the first Kickstarter which they used to spread the word to people who they already knew were interested in tabletop games, and who had already helped fund the earlier project. Meg from Po-Mo, who funded the interactive projector Lumo on Indiegogo, also tapped into her existing email list to spread the word about their campaign.

When Nils Karlen launched his Kickstarter for Simon Stålenhag's two art books Tales from The Loop and Swedish Machines, Lonely Places, he knew that Simon already had a tremendous following online that they could tap into in order to get funding. Fria Ligen used their own networks to promote the project, but what put them over the top was that Simon leveraged his social media channels and his Tumblr to promote it.

The takeaway: if you have an existing audience, or are working with someone who does, reach out to those people first and let them know about your project. If you don't, spend the time before you launch to build an email list, Facebook page, and Twitter following so that people across multiple social channels can stay up-to-date with your progress.

During his first Kickstarter for Relic: Expedition, Randy Hoyt was hesitant to share the script and rough storyboard for the video with his audience. The second time around, he says, he "realized that feedback was so important" and posted the rough storyboard on YouTube and shared it on Twitter and Facebook so that he could get people's feedback. He also allowed backers to vote on different variations of artwork for Lanterns: The Harvest Festival, which increased engagement and excitement about the project.

The takeaway: By offering backers the opportunity to give their input on things like artwork and design you give them an added incentive to back your campaign: not only are they getting a cool product if your campaign meets its goals, but they also get to participate in the creation of something that interests them.

Nils Karlen mentioned that during his research for Simon's books that they found that having a very low pledge level (a dollar or two) was an important step to get the campaign started because Kickstarter's metrics consider ever pledge, no matter how big or small.

They also used early bird pledges to incentivize people to start donating early (an early bird pledge is a limited pledge level that is strictly better in terms of price than a comparable level.) By offering limited-time options it mobilizes backers early on, and it also gives you opportunities to promote the campaign by appealing to this sense of urgency eg: "only two more days of our Early Bird $10 option!"

The takeaway: It might seem tempting to only offer pledges at higher dollar values because it will feel like getting closer to your goal faster, but remember that everyone who contributes to your campaign will likely spread the word about it, as well, and you don't want to alienate potential backers by only offering expensive options. Try to create a pledge system with rewards and dollar amounts that appeal to everyone.

Tamar Swartz, who used Indiegogo to fund her project Journey to Creative Surrender, mentioned in her interview that she had to remind herself that contributions come in waves, and just because there's a lull doesn't mean that there's a reason to get discouraged, and Mike Raven mentioned in his Traveling Book interview that he also struggled to stay motivated in between donations.

The takeaway: Don't let a slow day get you down! It's totally normal to get stressed out or feel anxious if your project isn't funded within the first few days, but as long as you stick to your promotional schedule and continue to do things like respond to emails, send out updates and stay active on social media you'll soon see another surge of backers.