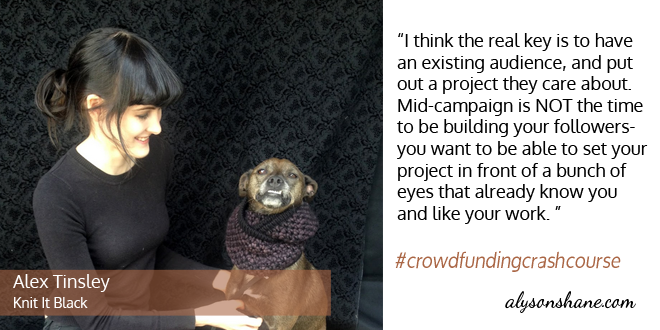 Alex Tinsley has been designing knitting patterns under the label Dull Roar for eight years, and used Kickstarter to fund her project Knit It Black, a collection of all-black knitting patterns.

Can you briefly describe Knit it Black?

Knit It Black is a collection of all-black knitting patterns, designed to raise awareness and funds to benefit animal rescue- specifically, black-coated animals, which have a tougher time finding homes in shelters.

Why did you feel that the crowdfunding model was the best way to promote the project?

Well, my only other choice was to try and fund the whole project out-of-pocket, which may have been do-able, but it wouldn’t have been nearly as good as it can be now. There aren’t a lot of other options for getting funding in this field. Crowdfunding allows people to get involved at the ground floor, support something they believe in, and pre-order the product, in a way.

I’ve used Kickstarter before and had a good experience, so I figured, why not? Indiegogo seems like a good option too but I’ve never tried it. Initially I chose Kickstarter because they are the most well-known and widely recognized platform, but when you’re bringing your own audience I’m not sure that choosing one platform over another matters too much.

Almost nothing, honestly. I made the video with the video functions on my iPhone and Canon DSLR, edited on software that came with my computer; a friend donated the music, and I reached out to my Twitter and Facebook communities for photographs of black pets to use. It’s not a great video, but it gets the point across. If I had been funding the project out of pocket it would have taken a very long time, as I put it together piecemeal between my other work, investing a little bit here and there as I could afford to. 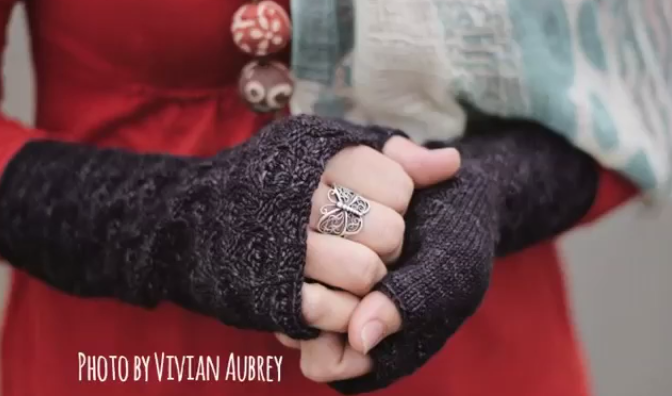 I had several of the items knit or partially knit, and most of the project planned out in my head, but in July I was offered a good advertising opportunity starting in August and I knew I wanted it to be for the Kickstarter...which meant I needed to get it rolling NOW. Then my photographer had an opportunity to come to town later in August, which means I have to get the knitting done ASAP as well. I feel good about this timeline, though- I work well on a deadline.

First I made a big list of all the expenses, to figure out what my goal number needed to be. Then I started brainstorming prizes, and factoring in those costs as well. I reached out to a few people to help me out - the musician, a yarn dyer I had previously mentioned the project to, etc. I was very lucky that everyone was able to work with me on a very quick timeline.

Actually shooting and editing the video was the most gruelling part- I don’t particularly like hearing myself on camera, and dogs never seem to do what you want them to do when you go to record, haha. “Managing” hasn’t been bad- mostly just answering questions as they come up and responding to the feedback I’ve gotten. The real work comes when it ends and rewards need to be fulfilled.

I went through the same channels that I usually use to promote my knit design work - Twitter, Facebook, my blog, my newsletter, Ravelry. It got funded and then some, quite quickly, so I’d say it was successful.

I think the real key is to have an existing audience, and put out a project they care about. Mid-campaign is NOT the time to be building your followers- you want to be able to set your project in front of a bunch of eyes that already know you and like your work. I don’t think it hurts to appeal to multiple interests - in my case, knitters, animal rescue supporters, and people who like dark fashion. My audience is mostly knitters but I know there’s a lot of overlap.

Getting it done in a hurry! It’s easy to put off a big project like this, especially when it involves some stuff you don’t really like doing (video, for me) but having a firm deadline really got my butt in gear.

Build an audience first- and build the *right* audience! If I have 2000 knitters following me on Twitter and I try to launch a Kickstarter to, say, start a bike company… I’m going to get a lot less response than if I’d matched my project to my audience. Honestly I think that’s far more important than a flashy video or tempting prizes- deliver a project people care about, to the people who care about it.