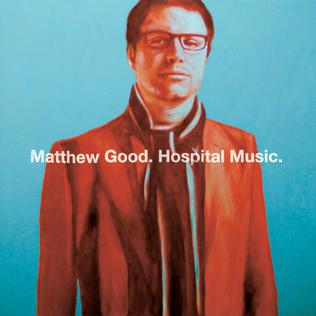 Happy belated birthday, Matt Good. Thanks for writing so many songs that somehow resonated with me even though we've never really met

(signing a CD on a tour bus after a show doesn't count, I don't think)

and for being the first musician to say something that moved me.

Matthew Good Band (MGB) played a lot on Much Music when I was a kid and like any good Canadian kid I owned and wore out the CDs for Beautiful Midnight, The Audio of Being (and the Raygun EP which is still a personal favourite.)

But as good as the alt-rock stylings of MGB were they didn't hit you. Never washed over you and made you go

In 2003 Avalanche, his first solo album, was released and though everyone went nuts for Weapon and In a World Called Catastrophe (a great song) I'd go nuts for Lullaby for the New World Order and While We Were Hunting Rabbits (which still gives me goosebumps every time I listen)

Oh my god that song.

I self-harmed as a teenager and I'd sit in my bedroom and feel hopeless and cry and cut and silently scream along to that song. I was sad and I didn't understand why and there was something about that song that said

and I thought he knew. I felt like, in some abstract, messed-up way, Matt Good understood what it was like to feel alone and not understand how or why you felt so hopeless. So miserable.

And then Hospital Music came out.

This was in 2007 when I was living in Hamilton and was a hot, hot mess. I was in the wrong relationship and didn't feel like I had any supports and didn't know how to cope so I drank and got fat and would daydream about coming home to Winnipeg and getting wasted with my party crew because everything felt horrible and out of control and getting messed-up felt like the only way to smother those feelings.

And then this musician I'd admired and respected for years came out with an album he wrote as the result of a mental breakdown, suicide attempt, and his subsequent time in a psychiatric ward and I realized that he actually did know those hopeless feelings.

Someone else out there knew the profound, isolating sadness I'd been carrying around and didn't have the words to convey.

And of course that didn't magically make things better.

I still had to move back to Winnipeg.

My home life was still a mess.

I was still miserable and confused.

But at least I could turn on my iPod and listen to songs like Champions of Nothing and 99% of Us Is Failure and lose myself in someone else's explorations of their own misery and confusion.

And this weird and foreign feeling that I wouldn't really discover or understand for another several years would wash over me. And for a few minutes, sometimes even just a few seconds

I'd feel like maybe things would eventually be okay.

In years to come I'd fall in love with the music of Leonard Cohen, John K. Samson, Joni Mitchell, Bob Dylan, Simon and Garfunkel, and others, but Hospital Music stuck with me, even though I rarely listen to it these days.

Some albums are like that. They're for a specific time. Place. Feeling.

But sometimes, when no one's around, I'll pull out the Hospital Music vinyl and look at the familiar cover: blue with the orange and red and brown. Colours I've stared at so many times before.

I'll put it on the turntable

and I'll have a good cry to the soundtrack of my many heartbreaks.

I did one of those quizzes from the mid-2000s

I'm getting married in two weeks