It's about a professor who attends his 30th college reunion on the surface but like a good book it's also about heartbreak and misery and that sad sort of indifference that sets in when you look back on your life and find yourself disappointed. It's also about lost loves, burying emotions and bittersweet heartbreak. 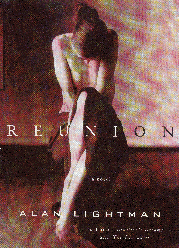 Though to say "I'm reading" isn't really true, because I'm having it read to me. Usually late at night after hours of talking and laughing when we should be sleeping and one of us looks at the other and says something like

which sounds like a secret term for something but isn't.

I haven't read anything akin to a romance novel in a long time. I generally don't care for them.

The last one I read was The Time Traveler's Wife which was recommended to me while in a Chapters with an ex-boyfriend's cousin while living in Hamilton and I bought it on a whim because, looking back, I needed some romance in my life. Even if I was only going to be able to find it within the pages of a novel.

Recently though I'm finding myself drawn to romance novels. Mostly ones about betrayal and heartbreak and making beautiful, fucked-up, life-changing mistakes.

Because that's what we're all doing all the time, really, and that's what I feel my life has been lately: something beautiful that came from a bunch of fucked-up mistakes

which is the story of everyone's life when you step back and look at it.

I read a great article from Elite Daily a few weeks ago called Why Readers, Scientifically, Are The Best People To Fall In Love With which I think is absolutely true.

Being able to draw from the references I've learned from books has made this process easier. I can turn to Wilde and Bukowski and, now, Lightman and see sides of myself in their words because books teach us to love

to look at things from other people's perspectives

to make the hard choices

to reflect on the bad ones

to not let the fleeting, inconsequential annoyances of day-to-day life get in the way of living.

I'm falling back in love with books and it's glorious. Up and down sort of day

These are the lives you love to lead