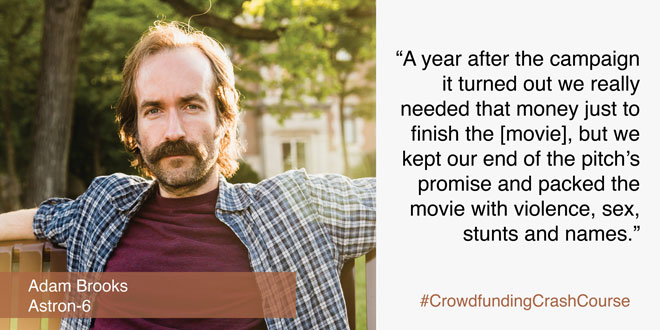 Adam Brooks is an actor, writer and founding member of Astron-6, a Winnipeg-based film production company. They used Indiegogo to crowdfund their film The Editor.

Can you briefly describe The Editor?

Yep. It’s an absurdist giallo movie about a film editor suspected of murdering a number of his co-workers in a film studio in the late 1970s.

Why did you feel that the crowdfunding model was the best way to promote the film?

Because it required the least investment for the highest gain - nothing to lose.

I didn’t spend much time researching it but they seemed to keep a smaller chunk for themselves than their competition.

It’s a bit of a long and boring story - we had started to shoot ‘The Editor’ as a fake trailer on SLR and eventually decided we might as well try to make an actual feature out of it. We wrote a script and applied for telefilm’s microbudget program.

We brainstormed a list of rewards minutes before taping the pitch video and then uploaded it to indiegogo and posted it all over our social media.

We've built a small audience already, so all the blogs that had previously taken an interest in our material were happy to post the indiegogo without us asking.

I think it was successful - we exceeded our goal.

I think you need a cool project, and cool rewards…. I really wish I’d budgeted all the postage I’ve had to spend on the rewards though or budgeted to pay somebody to do it for me.

I don’t know. We already had $120k. Our campaign was just trying to get us an additional $16k to punch up what we already had. A year after the campaign it turned out we really needed that money just to finish the thing, but we kept our end of the pitch’s promise and packed the movie with violence, sex, stunts and names.

Make a comic with the Soskas.