Even if you've been consistently creating great blog content for a while, these days it can be virtually impossible to grow your blog readership without creating profiles on various social media sites and engaging with people on those platforms.

However, just because you have a Twitter account doesn't mean that you're using it to it's full potential. In fact, you might be unknowingly committing some serious social media faux-pas and turning potential readers away from your website!

Below are a few quick and simple steps that you can take to make sure that you're getting the most out of Twitter and bringing new readers to your blog on a consistent basis: 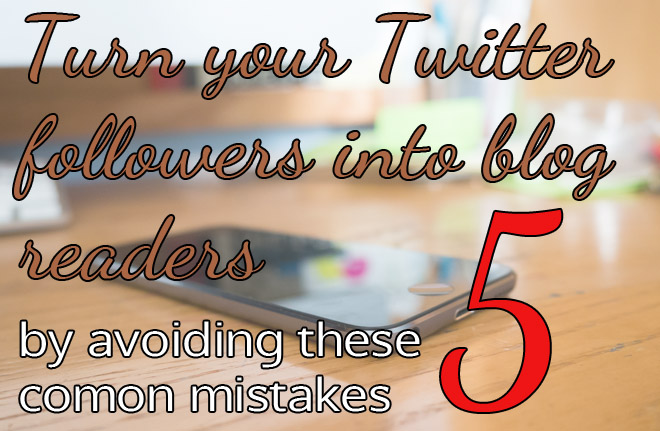 There are a lot of instances where automation can save you a ton of time, but automated direct messages aren't a place where you should be investing your energy. The reason is this: sending an automated, direct message tells people that you don't think that they're worth your time to engage with.

If you send every new follower an automated direct message that says something like "Hey! Thanks for the follow, why don't you check out my blog at [yourbloghere].com!" you might think that you're being polite and conversational, but what you're actually doing is spamming them with your content. They've chosen to follow you for a reason (a funny tweet, mutual followers, something you wrote, etc) and an impersonal direct message says to them "I don't care enough to tweet at you directly in public, but please go support my work anyway."

If you want to say hello to every new follower (and that's totally fine!) then make a point to do so publicly, positively, and keep your self-promotion for other tweets.

Contrary to what many Twitter users think, your Following vs Follower ratio doesn't have to be the same, and it's not rude to not follow someone who recently followed you if their profile and tweets don't match up with the sort of content you want to see and engage with on your feed.

You can easily grow your audience by tailoring the people that you follow and interact with to fit your blogging goals.


Twitter isn't a competition, and the person following the most people doesn't win at social media - in fact, what it likely does is dilute their ability to engage with others and have real, meaningful conversations. Only follow back if you mean it.

3. Never Engaging with Your Followers

The most important thing to remember when using Twitter is that it is a social network first and foremost. This means that you have to interact with, share content from, and ask questions to the people you follow. Simply tweeting out into the void isn't going to bring anyone to your website; you have to engage with people and give them a reason to click through to your content.

On the flip side, a major downside to having a lot of Twitter followers is that it's virtually impossible to interact with every one of your followers. The best solution is to create lists and add your favourite Twitter users to them so that you can easily stay up-to-date with what they're tweeting.

4. Only Talking About Yourself

This is the worst mistake that bloggers (and anyone, really) can make on any social platform, but Twitter makes this habit much more obvious because your timeline looks so condensed on your page.

For instance, if I visit a person's Twitter profile and all I see are a series of tweets that are essentially "thought bubbles" (eg: "I love Big Macs!" "Today was going great until I got splashed by that bus," "nobody ever visits my blog") with no interaction with anyone else I'm not going to follow them because they're obviously not contributing to a larger community - they're just using Twitter as a soapbox.

Do not use Twitter as a soapbox. It's a social tool and is insanely effective for growing your audience and expanding your readership when used effectively, and that means spending the time to get to know the people in your online community - ask questions, share interesting posts, congratulate people on their successes!

5. Tagging People in Your Tweets

When you post a tweet with a link to a new blog post, it's only okay to tag someone in the body of your tweet if they are involved with the post somehow. For example, if you reviwed an album you can tag the artist in the tweet, or if you interviewed someone you can tag them to let them know you've posted their interview.

The trick to get people to read is to build your audience by engaging with your Twitter followers on a consistent basis and showing them why they should care about your blog. Your Tweets should show people that you're a super cool, funny and interesting person (because you are, obviously), and because your blog is a larger extension of that persona people will naturally want to see more of what you have to say than what you can express in 140 characters.

To Sum It All Up

You can't force people to start caring about what you have to say, but by engaging with them and showing them that you're an interesting, caring individual they will naturally make the jump from being Twitter followers to blog readers and even newsletter subscribers.

This will take time and a fair bit of effort, but in addition to new hits to your site you will also be developing a larger network of interesting people who you can engage with to help you grow and succeed in your endeavours.

Do you have anything to add to this list? Have you ever had a bad experience on Twitter? I'd love to hear about it!