The Case for Knowledge Sharing

The other week I attended the Winnipeg Game Jam, a weekend-long event where local developers, artists and the like got together to spend a furious weekend creating an indie game together. Mostly they worked in teams, but there were also a lot of people who walked around and offered to help other teams when they had some downtime, which I thought was really interesting.

The more I thought about it, the more I felt that what I saw at the game jam was representative of the type of positive, collaborative spirit that I've discovered in Winnipeg. I frequently get the sense that "we're all in this together," and that we're all working towards common, shared goals of lifting each other up and working together towards success. 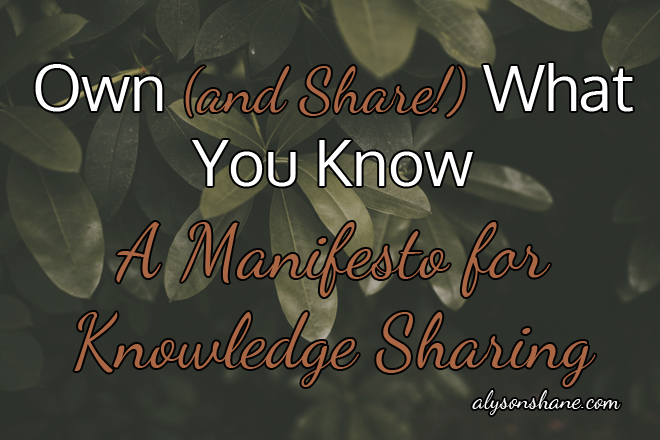 In the short time I've been involved in our community I've learned a deep appreciation for sharing knowledge and collaboration through attending events like the Winnipeg Game Jam, and with that in mind I'd like to discuss why I think sharing knowledge, experiences and resources is something that we should all strive to do.

First things first: I wouldn't be doing what I do without the guidance, advice and knowledge of dozens of people who happily shared it with me - over a coffee, over a glass of wine, whatever. The fact that I've been able to meet tons of helpful, knowledgeable people who have been giving with their time has allowed me to grow my business and, in turn, start helping others grow theirs as well.

As a result of these experiences and the help I've had, I've come to believe that knowledge is a powerful tool to have in your arsenal, and considering information economy in which we live, I'd argue that knowledge is more powerful when you share it than when you keep it to yourself.

Here are a few reasons why I think it's good practice to share what you know:

This is something that I've had to repeat to several of my clients who have been wary of posting blog content or articles which they fear will give their competition an advantage. Spoiler alert! Anything you know can be found with a quick Google search... but that isn't the point. By being open and giving with your knowledge people will have a greater respect for you - not just because you know what you know, but that you have the ability to articulate it and the desire to share it with others and help them.

Let's use Paul Graham as an example. For those of you not familiar with his work, Paul Graham is a programmer, venture capitalist and essayist (whose essays you should definitely read) who developed Viaweb, the first application service provider (ASP) which eventually got bought out by Yahoo! and allowed Paul to go on to found YCombinator, one of the most well-known and respected seed funds in the world.

Do thousands of entrepreneurs and businesspeople who apply to YCombinator think less of Paul Graham because he gives away his knowledge for free in essays and in meetings? Of course not. They eat up his words and try to apply his insight to their own lives and challenges, and when he speaks, they listen.

This is because people don't come to you just for your knowledge; they come to you for the judgments that you make based on that knowledge.

I've had a variety of coffees and hang-outs with local content-marketing types like myself where we've chatted about our various projects, struggles we're having, and how we can provide better service for our clients. I've received advice and doled it out in kind - but what's important in those interactions is that we've moved from being internet strangers to real-life acquaintances (in fact, if we're lucky maybe we can even level up to being friends, who knows?)


Especially in this digital age, the more people you know and develop healthy, positive relationships with the better off you'll be. Gone are the days of lone-wolfing it and trying to alienate everyone for fear that they might use your knowledge against you; by surrounding yourself with a vibrant community and constantly working at growing your network by sharing what you know and helping one another you set yourself (and everyone you help!) up for future success.

Sharing knowledge can change the world

By working together and sharing ideas, information and experience we can make really great things happen.

Case in point: open source software. The PHP language, which powers about 60% of websites, or Wordpress, which powers about 30% are both, open-source. Huge, world-changing websites like Facebook wouldn't exist without open-source tools like PHP and MySQL. Linux, which is the open source code behind Android, powers most of the phones on the market today, and it's creator, Linus Tovald also created an open source tool called Git, which has changed the way that millions of developers work and build collaboratively.

Open source is my favourite example of the benefits of knowledge-sharing and collaboration because it hasn't resulted in mass unemployment or people losing their job prospects because they taught someone else what they knew. In fact, it's only strengthened the developer community and allowed them to make amazing things together.

Why does this matter?

It matters because the world is rapidly changing, and having a mindset of scarcity is something that, collectively, we're moving away from. People are starting to realize that there is in fact room for everyone to be successful, and by lifting each other up we all benefit from it.

I've seen it firsthand at events like the Winnipeg Game Jam, and at local events held by groups like RampUp Manitoba, Skullspace, New Media Manitoba and AssentWorks (to use a few local examples). By sharing knowledge and resources our communities are growing and flourishing, and by helping other people we become more powerful, ourselves. Giving away knowledge doesn't diminish how much of it you have, and we all benefit from a community of people (in whatever profession) who are willing to contribute and make that community the best that it can be.

Know what the best part in all of this is? Helping people feels good. The feeling that you get when you do someone a favour, introduce them to someone who helps launch their career, or even give them a hand in navigating a sticky situation is so rewarding, and that person will remember you for what you did for them and will be more than willing to help you in the future.

Sure, there are exceptions to this rule -some people are just jerks- but going around assuming that everyone is trying to screw you over or waste your time is a pretty sad and lonely way to go through life, and pretty much guarantees that nobody will want to work with you once your true colours show through (and believe me, they always do).

The world is changing. Like I said at the beginning of this post: we live in an information economy, and knowledge is power - especially when you have a lot of it and share it readily. When you take the time to share what you know with people it guarantees that you will be successful in your endeavours because people will want to work with you and help you. It also guarantees that you will be more respected by your peers, more well-liked, and that you'll be a happier person overall because (and this is really the most important part, at the end of the day.)

What is the most important piece of knowledge that someone had given you? I'd love to know!