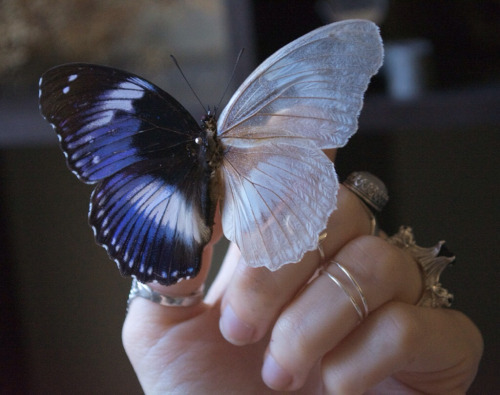 There comes a time in every person's life when they experience a fundamental shift in how they view their parents. A moment when the veneer is peeled away, revealing the flawed, real people our parents are underneath all the assumptions we make about them as their child.

In the most recent episode of Hidden Brain (a great NPR podcast I can't recommend enough) the host was interviewing a woman whose view of her father changed when she was twelve years old.

Someone had called the house looking for her dad, and she answered the phone to say he wasn't around. She remembers that the caller sounded old; his voice shaky. He was upset. He said:

Those few words fundamentally changed her relationship with her dad. She no longer saw him as a charismatic, charming artist. She saw him for who he really was: a liar, a con man, and - it seemed - a thief.

My moment of reckoning with my own father didn't happen until I was in my mid-twenties. I was going back through some old emails, looking for something I'd intended to reference at my next therapy session, I think, and I came across an email exchange from July of 2010.

My dad was upset that I was quitting my government job to attend university. Over the course of several he emails made it clear that he was angry at my decision, and took issue with my reply, where I told him (in so many words) "I'm an adult and you need to respect my decisions and not speak to me so disrespectfully."

Seeing his response, which follows, shook me to my core:

Wow, in nut shell, write me off. You never contact me unless you want something from me.  You've forgotten my birthdays, never see me on father's day, etc.* You obviously are very self absorbed and unless I serve some purpose you have nothing to do with me. When was the last time you called to see how I was doing. Can't remember can you. How is my back, don't know do you. Don't care do you, typical.**

I include the text above because, until that moment, I hadn't been presented with an example of how my dad handled conflicts in our relationship. Sure, I had memories of angry emails, and of him hanging up on me when he got worked up, but I'd never been faced with real evidence of how my father treated me and spoke to me since we'd become estranged a few years earlier.

Until I rediscovered that email I'd been under the impression that I was in therapy largely due to my relationship with my mom. That it was her abuse, gaslighting, and manipulation of everyone around her that was the primary contributing factor to why I had severe anxiety and extremely low self-worth.

Like the woman in the Hidden Brain episode, seeing those words changed how I viewed my father.

Until then I'd always viewed him as a tragic hero. A guy who got married too young, was tricked into having too many kids too young, and was trying to do the best he could in a marriage where his spouse would routinely brag to her kids that "your dad can never leave me because I'll take everything."

The idea of my dad as a tragic hero was the prevailing impression I'd gotten from talking to our family, and the impression I developed as I became the target of my mom's anger as a teenager and my dad tried, again and again, to stand up to how she treated me.

Until I read that email I'd assumed that my dad was, at worst, a cowardly hero.

Someone who tried and failed to do the right thing. A man who got stuck in a bad situation and was trying to make the best of it because he didn't have the willpower to man up and leave.

I remembered my dad as someone funny and kind. With a temper, sure, but as someone who was more likely to start crying during an argument than to hurl insults and lash out angrily.

Despite everything that had happened, the teenage years spent largely in the counsellor's office because I was to distressed with my home life to go to class; his inability to convince my mom to let me move home so I could attend university and not sink into debt; and even the estrangement because he refused to have a relationship with me where my mom wasn't physically present... I still saw my dad as a hero.

Maybe a tragic, or cowardly one, but a hero nonetheless. Because he did the best he could to be supportive and to help me become a happy, well-adjusted person.

At least, that's what I'd told myself and fully believed until I discovered this series of emails.

The last time I communicated with my father was earlier this year. My mom had decided to run for school trustee in the recent civic election and my dad was struggling with the basics of setting up a website, social media profiles, etc. - so he reached out to me.

"Not as my dad, but as a potential client."

I don't want to go deep into my feelings on this issue, but suffice it to say that my mom is about as unqualified to hold public office as they come, and I had no interest in helping her.

So I wrote him back.

I wrote long email explaining how I felt, reiterated the situation that had caused us to become estranged in the first place, and laid out the things that needed to happen for me to feel comfortable re-engaging in a relationship again.

I ran it past John and a few people whose opinions I respect, who told me I sounded reasonable. Firm, but reasonable.

My dad, for what it's worth, never wrote back.

What I've learned in the years since I found those emails is the ugly truth that every child eventually discovers about their parents: that they aren't perfect, and they're just as capable of being petty and mean and immature as anyone else.

I obsessed over the 2010 emails for a while. I read them and re-read them, almost unable to comprehend that the person I had believed in and loved unconditionally could also be the same person accusing me of not caring about them and being self-centered because I pushed back and asked for respect and boundaries.

I brought the emails to therapy and I cried like I was in mourning.

As kids, we idolize our parents. We look up to them. We believe them to be infallible, and when the ugly truth of who our parents really are comes crashing down on us it's our responsibility to grapple with those feelings.

It becomes our job, as their children and as adults, to make sense of the contradiction between who we believed they were, and the person our parents really are.

Like the woman in the Hidden Brain episode I had to come to terms with the fact that my dad, like most people and most parents, was not who I believed him to be.

In the episode, the daughter eventually reunites with her father, though their relationship is strained. They only talk by phone, and after her dad suffers a fall and winds up in an assisted living facility, she visits him only once before he dies.

During their last meeting he tells her "I'm sorry for all the things I've done" and the daughter is left wishing she'd asked her dad: "what things? What were you sorry for?" before he died.

When she recalls this to the host, she sounds distressed. Like there's something nagging at her; something unresolved lurking beneath the surface. She's struggling with the fact that her dad is gone forever, and all she's left with are the remnants of who she thought he was, who he turned out to be, and a series of items and leftovers from his life that she must piece together to start to fill in the blanks.

I know these feelings. My dad is middle-aged; his health has never been great. He has back problems and high blood pressure and high cholesterol and drinks and smokes too much. I'm acutely aware that he could have a heart attack or a stroke at any time, leaving me with only the scraps of his life to glue and stitch together to create an image of who he really was.

Sometimes, when I find myself becoming consumed with this looming reality, I feel an urge to pick up the phone and say:

"What are you sorry for, Dad?"

But maybe I don't want to hear his answer after all.

*I forgot one birthday/Father's Day when I was 16 and not living at home because of conflicts with my mom.

** What my dad stated here is also untrue; I regularly called and emailed him, and we went out for lunch together every so often right up until we stopped speaking.