The Seven Oaks Library, located on Jefferson Avenue in the heart of Garden City, might be closing as part of a sweeping round of cuts proposed by the Winnipeg city council.

Before I tell you why this matters, and why I'm angry, I want to tell you a story about the Seven Oaks Public Library:

I don't remember feeling happy very often growing up, but I was always happy when we went to the library.

When I was little my parents enrolled me in Story Time, and every Monday they'd take my two brothers and I to the library to borrow a big stack of books and VHS tapes. We didn't have a lot of money growing up, but the library gave us something to do, and look forward to.

As I got older and things got worse at home, my local library became somewhere I could go when I was upset, and where I could pass the time in a warm, quiet place.

I loved having a place where I could go and escape my life by diving into a good book.

I felt safe in the library, and accepted there.

I fell in love with reading, and became a writer, because of the Seven Oaks Public Library.

Without that library I wouldn't have this blog. Or my business. Or my sense of curiosity and eagerness to learn, both of which are the result of becoming an avid reader.

I wouldn't have any of that without my local library, and it might be closing.

But that's not why I'm angry.

I'm angry because our mayor and city council are lying to us about why they want to close it.

A few weeks ago the city released a budget proposal that says our city is so tight on cash that they need to make the following cuts:

This is upsetting news on its own, but yesterday I read that even though all these cuts are coming, the city is quietly pushing through a $71 million dollar community centre called The South Winnipeg Recreation Campus in Waverley West.

What's included in this fancy new recreation campus being built on the very edge of our city?

Our civic government is cutting and under-funding programs and community centres for inner-city residents, and literally building the same things in a brand-new, high-income neighbourhoods.

This is literally robbing from the poor to give to the rich.

Through this move, the Mayor Bowman and City Hall are saying that kids like me don't matter.

Kids like me, whose parents were strapped for cash and needed a way to keep their young kids busy by borrowing books and videos and signing us up for programs

whose home lives were negative and chaotic and stressful, and who needed a safe, calm space to be alone when things got tough

according to city hall, kids like me literally don't deserve these opportunities, because we need to make sure kids in wealthy suburbs get them instead.

It's no wonder we have a meth and violence crisis in this city. It's pretty easy to see which voters City Hall and the Mayor think are most important.

Oh, and if you're wondering why you didn't hear about this when the budget was made public?

It's because the city deliberately left the dollar amount out of the capital budget: 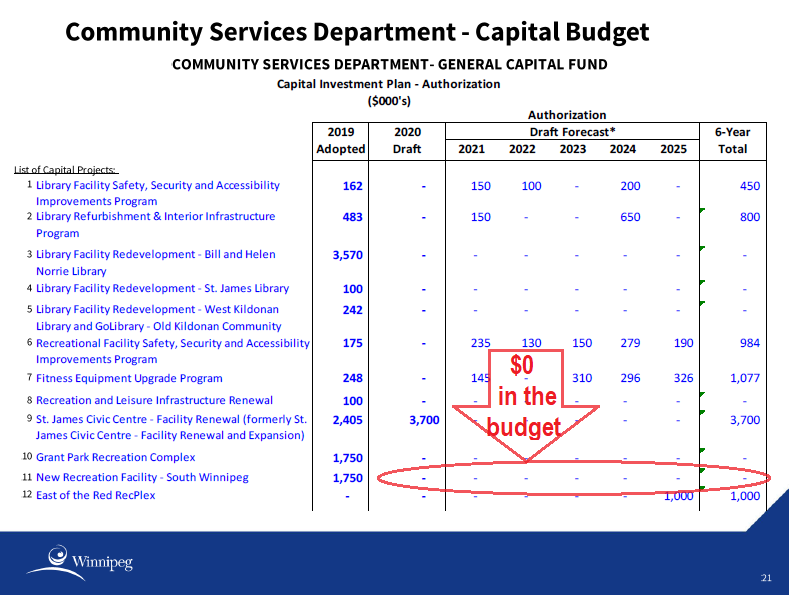 Image via Dear Winnipeg via The City of Winnipeg

they've also been hiding it from us and hoping we don't find out.

I'd like to give a big shout-out to Dear Winnipeg for doing the deep-dive on the topic that inspired the post. You should read it.