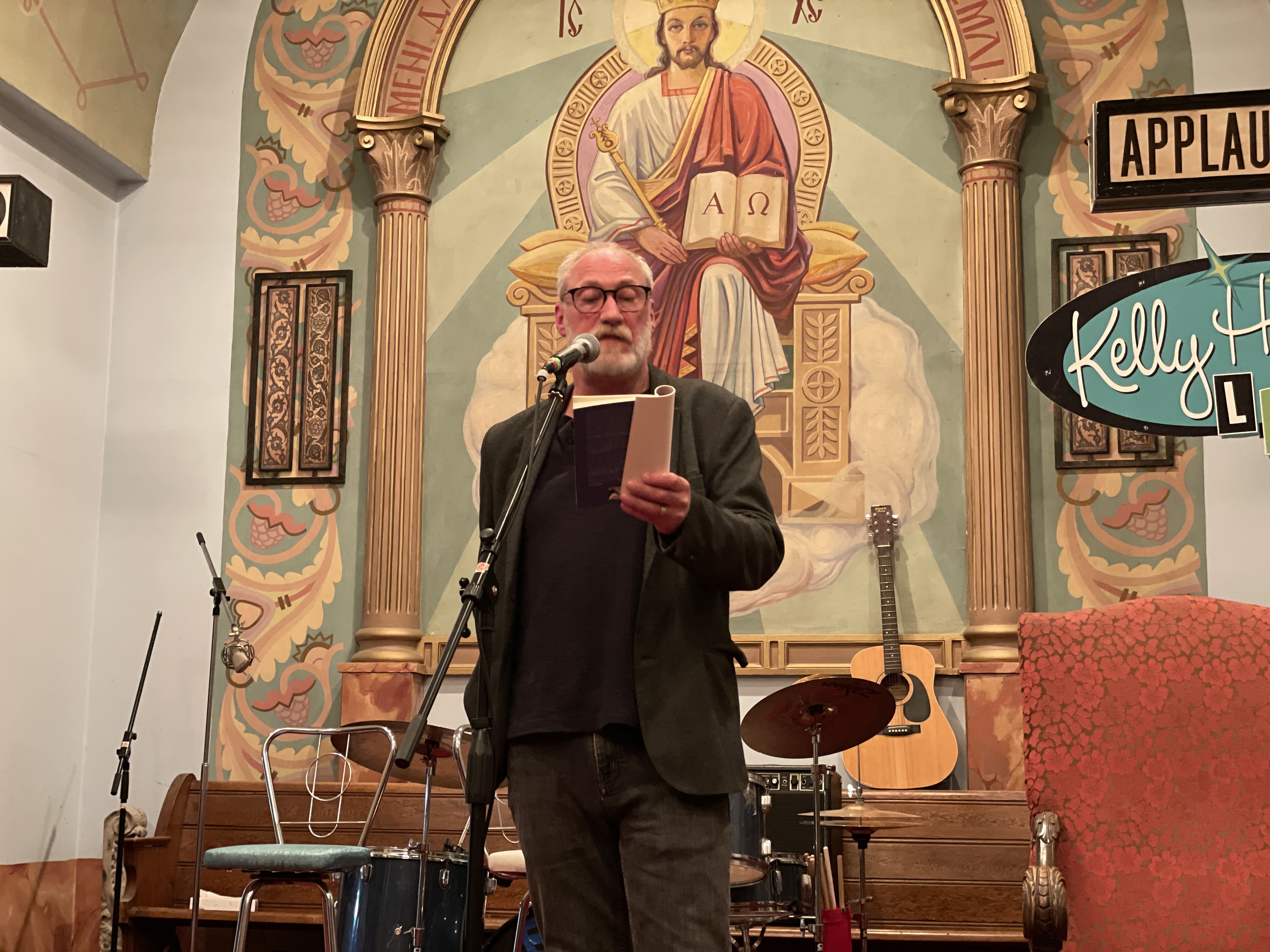 Yesterday I went to the launch of "Through Disassembled Houses of Perfect Stones"which is a thin, beautiful book of poetry by Manitoba poet David Yerex Williamson.

I met David a week ago today when John and I performed on Kelly Hughes Live! which is a live-broadcast variety show of sorts that's shot in The Valiant Theatre, which is actually an old church that's slowly (slowly) being transformed into a venue while Kelly lives in the back.

I'm not religious but there was something moving about being in that old church. The sweeping ceilings, the still-there pews, the stained glass windows and the shadows on the wall where old paintings and religious items used to hang.

Churches, for better or worse, are where so many people's lives start, end, and often where some of the most important moments happen. I don't believe in higher powers but "House of God" feels fitting for these quaint little spaces filled with memory and emotion.

(Unlike the "megachurches" popping up in affluent parts of town that seem out of step with what religion is supposed to mean for people, but what do I know I'm just a heathen atheist.)

When we played in the church it was part of a larger group of guests: there was J. Williamez, a local singer-songwriter who wrote a scathing series of songs about our previous monster of a Premier

(not to be confused with our current monster of a Premier)

Shelley Cook, a local journalist and writer who I feel like I've known my whole life at this point

us, Big Trouble in Little Wolseley, who provided musical entertainment,

and David Yerex Williamson, the poet.

I've always had a soft spot for poetry. I'm less partial to poems that rhyme — I don't usually rush to read Whitman or Chaucer even though I have a soft spot for Poe and Keats — because they tend to feel flowery. Too full of extra words just for the sake of completing the rhyme.

The poetry we heard last week, and that I heard again last night, didn't rhyme. Didn't feel like words or lines were stuffed-in for the sake of it.

These poems were raw. Strong, muscular words gathered together in sinewy bursts of idea and emotion.

The poet has lived in Norway House, MB for 20 years and when asked about how the landscape influences his poetry he said

"A fish doesn't know it's wet until it isn't. That's how it feels to leave nature and come to the city — you don't realize how much it affects you until it isn't there."

I went to the reading with Tineke and before the event we had dinner at the restaurant, Prairie Ink, that's attached to the bookstore. We ordered the same thing (blackened chicken clubs with french onion soup) and fancy coffees with whipped cream and we laughed and brainstormed and talked about all sorts of things. The hours slipped by the way they always do when you're spending them with someone who matters to you.

After we'd eaten and paid we shuffled into plastic chairs alongside a few dozen people, colleagues and teachers, family and friends, and watched the sun set through the two-storey windows as the poet we'd all came to see fed us slices of poetry like cake.

It felt good to support the arts again. Good to sit next to someone I love, surrounded by people supporting someone they love, letting the words wash over me

taking it in. Feeling normal.

"you don't have to"
"that's a nice offer, but unnecessary"
"I'd appreciate it, but I don't expect it"

which made me more determined to be there because that's what you do:

you show up when you say you will.

I didn't get the chance to talk to David after his reading but I hope he saw me in the crowd and could see how his words shifted things in me as he read them, just like they did last week and just like they will again when our copy of his book arrives

(we ordered it online last week so I couldn't get it signed yesterday; silly us)

but I was thankful to be there either way to sit with my friend, his friends, and feel like a community again.

(If you'd like to order a copy of David's book of poetry you can do that here.)