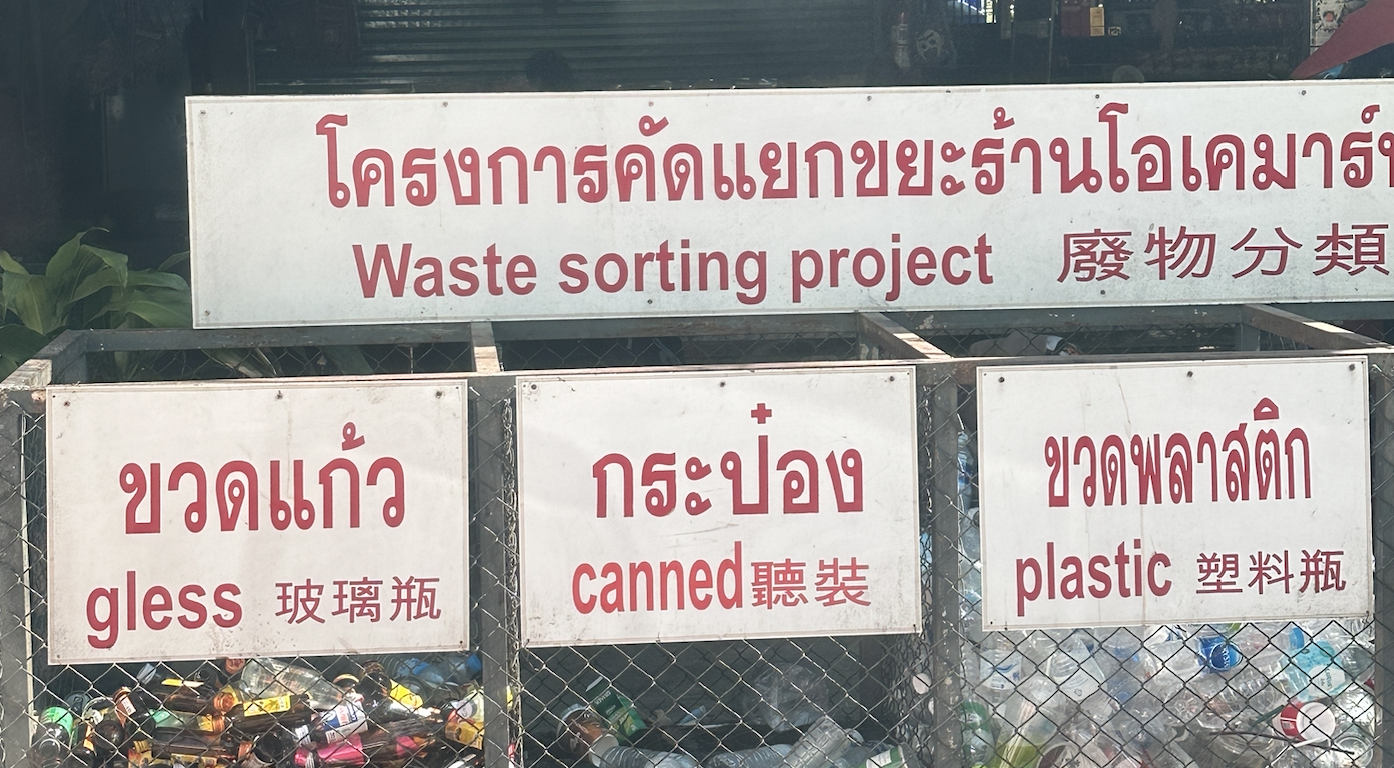 I'm writing this on our balcony in our AirBnB in Pai, Thailand.

and, way off in the background

some of the most jaw-dropping mountains I've ever seen.

Pai is a tiny city of about 2,300 people high up in the Northern part of Thailand and is a popular spot for hippies

which you can tell right away by the abundance of
yoga studios, meditation workshops
breathwork retreats
kale and chard growing in every shop, and

more ads for avocado toast since I was in Toronto last fall.

We're here for none of those things because in addition to being a hotspot for hippies, Pai is also close to waterfalls and natural hot springs and a land split we're planning to check out while we're here.

Tomorrow we'll have been in Thailand for a week. We started to leave Canada last Friday and our flights were originally supposed to be

which came with a 9-hour layover in Vancouver and a 16-hour flight right to Bangkok.

We landed in Bangkok around 5 AM and split a taxi with Cort and Abe and Josh who we met on the plane to get to our respective stays. I was getting crabby in the wet, humid Bangkok heat but as soon as we got into our AirBnB and I showered 16 hours of plane stank off myself

(what is it about planes that makes you so gross?)

I found a new lease on life so we set out to to reacquaint ourselves with that big, bustling, sweltering city.

We haven't been back to Thailand since 2019 and it's soooooo good to be back.

(we left Friday AM and arrived in Bangkok Sunday morning)

Over the next few days we got Thai massages, pedicures, ate super cheap (like $2 each) food from roadside stalls, met up with some folks from Winnipeg (!!) and clocked about 30,000 steps every day wandering around.

Wednesday we caught the night train up to Chiang Mai, and waking up to the sunrise over the Thai countryside was every bit as beautiful as I remembered.

Chiang Mai has been my favourite place we've been in Thailand to date. We spent a week there last time and it didn't feel like enough and this time we were only there for two nights because it's the stop-over on the way to Pai and it definitely wasn't enough.

But in two nights and one whole day we managed to squeeze in:

shopping and drinks and wandering around the night market

and clocking lots of steps

so, so many steps. 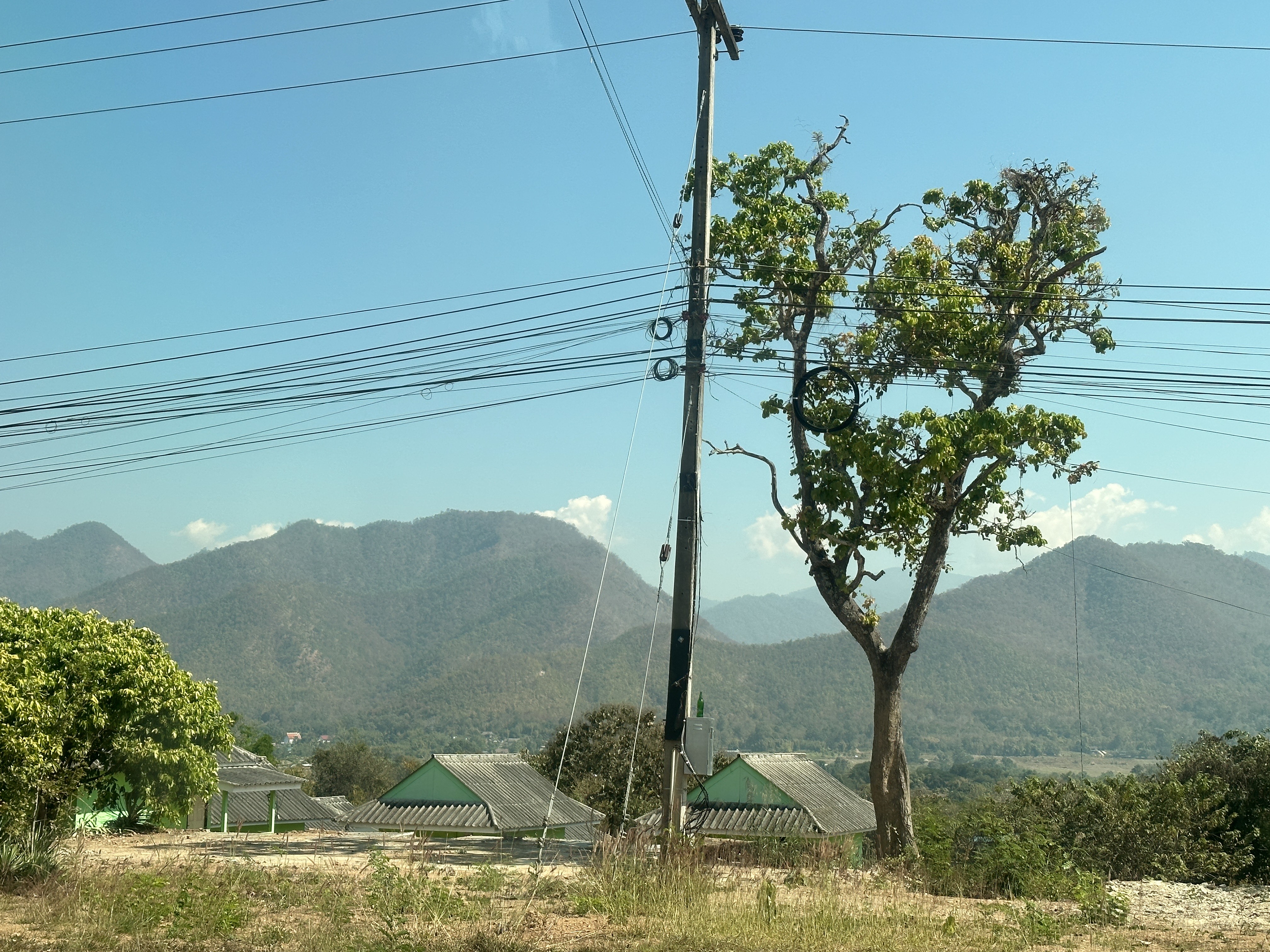 This morning we got up early and took a bus to Pai which can only be accessed by infamously windy roads where apparently people regularly barf on the bus from motion sickness.

When I first heard about it I was like "nah"
but after almost 3.5 hours of
twisty, windy, sharp turns
and a body full of malaria meds

(which we started taking yesterday in prep for our time in Pai, and which gave us both some tummy times)

To be clear: I did not barf on the bus to Pai.

But I definitely had to spend some time focusing on the mountains out the window, taking deep breaths and humming a lil bit to distract myself from the mounting feeling in my throat.

Anyway I was pretty happy to be off the bus.

Since getting here we've walked around
(are you sensing a theme here?)
ate papaya salad and pork, rice, and Thai basil for lunch
dropped our laundry at a laundromat
had a beer and people-watched
talked about new tattoo ideas

and now here I am, drinking a Chiang beer (my fav local bevvy) and writing this to you.

It's wild and exciting to think we have several more weeks of this
months, really
to soak up this country and a few others we're planning to hit
(Cambodia, Vietnam, and Japan, specifically).

I've missed travelling and exploring new places, seeing new things
eating all the foodz
and being moved
reminded
and humbled by the kindness of the people we meet everywhere we go

especially the lady at the front desk who helped me open this beer, since I was a dummy and forgot to buy a bottle opener.

I took the beer down to the lobby, motioned to her so she knew what I needed, and she laughed

took the bottle from me

and slammed it against the railing, knocking off the cap
(something I would never, ever do somewhere where we were staying)
and said in broken English "you knock off! Is easy! You do upstairs too!"

(something I would have never imagined she'd suggest)

so I bowed and said "krap khun kha" (thank you in Thai), feeling silly, and went back upstairs.

and I loved it.

I missed being a dumb tourist.