Supporting My Community: MBCouldBe and Pride 2015

Somehow on a random Wednesday I found myself wide awake at 5am. As I was lying in bed cuddling Toulouse and listening to John snore softly (it's adorable, seriously) I started thinking about community, how important it is to make the time to make your values known, and to support causes that you believe in.

This past weekend I volunteered at #MBCouldBe, a policy summit put on by Manitoba Forward. I volunteered with John and Luke Jacob, and we spent the day listening to various speakers and panel discussions and tweeting from the Manitoba Forward twitter account (as well as our own, of course).

(All of us setting up for a busy day of Tweeting.)

When I arrived I wasn't sure to expect; what sorts of people would be there? What would their views be? Was I just walking into a giant, one-sided political discussion?

What I found surprised me: I met a diverse group of individuals and speakers who were all interested in actively discussing ("actively" is putting it lightly in some cases) the ways in which Manitoba could work towards being a more successful and vibrant province. I was impressed at the variety of speakers at the event: some were obviously very centre-right, some much more liberal in their views, and the discussion that took place was positive and informative.

What impressed me the most, though, was the sheer amount of people that came out on a warm June afternoon on a Saturday, while events like Jazz Fest were going on and patios were abound, to sit in an event centre and discuss Manitoba's future. 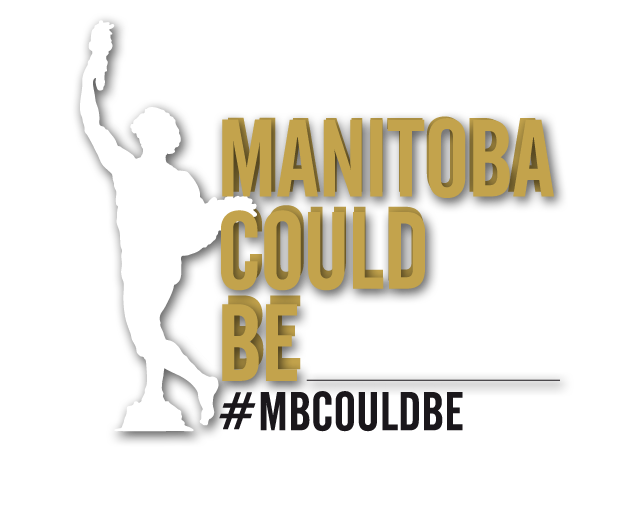 This was important to me for several reasons, the largest of which is that as a Manitoban I was raised with a very healthy sense of self-deprecation, which I've written about before. Manitobans can be snarky and we can be cynical, especially about our own hometown and our province. We're raised with the belief that Winnipeg, and Manitoba on a larger scale, simply isn't worth the energy. Why put time into improving our local economy or starting a small business here when we can just run off to Toronto, Montreal, or Vancouver?

I used to have that mindset. Not so long ago I was dead-set on moving to Toronto, where I have some family. I was going to leave Winnipeg in my dust and make it big in Ontario. Then something changed: I took a class at the University of Winnipeg called (appropriately enough) "The History of Winnipeg" which completely changed my views.

When I started spending time getting to know the complexities of the city and the province where I grew up, I started to develop a deeper understanding of why our issues were unique, and for the rich, beautiful history we have here and the strong, creative, interesting people decide to spend their lives here. I fell head-over-heels with Winnipeg, and decided that I wanted to stay and invest my time, my business and my life to helping make it a better place.

Many Manitobans still have that negative mindset, unfortunately, but among the people that I spoke to and who participated at #MBCouldBe I didn't hear a single dissenting voice. Instead I heard a ton of local pride, and even when we discussed ways in which we could be better, it was always with hope and with a fierce sense of dedication to making Manitoba an even better place to work and to live.

Another way I experienced local pride this weekend was the following day, when I marched in the 2015 Pride Parade. New Media Manitoba sponsored a banner in the Pride Parade and I tweeted about it and marched with my friends in support of the LGBT community.

There were over a thousand people who showed up in costume and with banners and floats, and the outpouring of love and support for the LGBT community is what makes Pride one of my favourite annual events - I've been going since I was allowed to start taking the bus downtown from the suburbs where I grew up.


Someone once said to me "we march in the Pride Parade so that one day we don't need one." As in, by raising awareness and support got the LGBT community with the parade, eventually they hope that society will become accepting of those individuals to the point where a parade is no longer necessary. The whole point of the annual Pride week is to mobilize support for the LGBT community and to show people that there are people who support the rights and freedoms of others to express themselves and to be who they are, regardless of what (if any) gender they identify with.

This morning, while watching the dawn creep into my bedroom it struck me that half of showing your support is simply showing up. It's very easy to play Armchair Activist (and we all do, to some extent) but by taking the time out of our daily lives to physically show up and show support for our local communities -be they political, social, sexual, whatever- we help make the world a better place because we add our voices and our bodies to causes that matter to us.

I spent my past weekend, almost in it's entirety, lending my time and my energy to causes that I believe in and it felt amazing. It was a terrific reminder that, really, all we need to do to start making our communities a better place is show up and get involved.

Have you attended any local events in your community lately? What were they for? I'd love to hear about them!