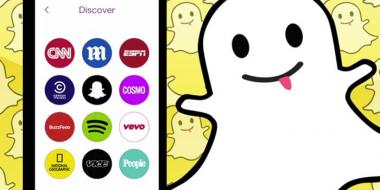 In fact, until the they released the Discover feature at the end of January, it was one of my least-frequently used apps. One of those "everyone has it, so I ought to as well" installs.

Which is why, initially, when I heard that they were monetizing via a new in-app feature, I was skeptical to even launch the app and check it out.

I was surprised to find out that it's good. Really, really good.

Not only is it good, but according to a recent article in TechCrunch, it's also really successful. The article refers to data usage as "skyrocketing" after the launch of Discover and states that:

How does it work? Basically Discover is a bunch of curated content from media organizations and brands, delivered as a sort of mini-magazine which, like all Snapchat content, only lasts 24hrs.

This is indicative of a larger trend away from traditional ads and towards sponsored content, but Snapchat is taking things one step further by making the ads themselves the content. With Discover the ads are something that you can seek out and explore, instead of a nasty-looking banner ad at the bottom of your screen, or an annoying pop-up in the middle of your newsfeed.

This is accomplished by Discover being a separate function from the rest of the app. This minimizes disruptions to people who are there to use the app as social sharing tool (ie: not me), which doesn't alienate their initial users, but instead presents a new, engaging way to discover content. The multi-tiered layout offers video, text and photos, and allows the user to dig deeper or to simply swipe to the next topic. It feels more like perusing a digital subscription to a magazine than perusing paid ads, which is refreshing to say the least.

What makes Discover and the advertising created for it is what initially set Snapchat apart when it appeared on the scene: the limited nature of it's content. Because each piece of content only lasts 24 hours, brands need to focus on being consistently creative and engaging when creating an episode-based approach to their storytelling.

By being creative with their advertising strategies, Snapchat has begun to usher in a new age of sponsored native content which benefits everyone. It's even managed to convert a relative non-user like me into someone who uses the app specifically to check out it's advertisements.

If that doesn't constitute success, then I don't know what does.

What do you think about Snapchat's Discover feature? Love it or hate it?