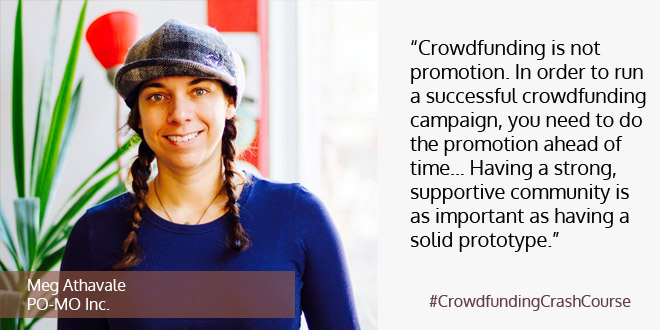 Meghan Athavale is an entrepreneur and artist. She is the co-founder and CEO of Po-Motion (PoMo) Inc and Lumo Play.

She is currently running an Indiegogo campaign to crowdfund the LUMO Interactive Projector.

Can you briefly describe Lumo?

Lumo is a turnkey gaming and display system that includes a projector, a sensor that captures motion data, and an Android processor. It projects games you would normally play on a touchscreen onto the floor of a child’s playroom, so they can play by jumping, moving, waving their arms and running. It also works as a regular projector, so you can play movies with it, and non-motion reactive games (using a bluetooth controller.) Finally, Lumo has an online content creation suite designed so that young children can customize games using their own artwork.

Why did you feel that the crowdfunding model was the best way to promote Lumo?

We’ve been seeking investment for Lumo for about a year. It’s tough to get investment for hardware, and even tougher if your company is based in a place with very little access to VC communities. VCs only fund about 1% of the deals they see. Here’s a great article explaining why: http://www.startupcfo.ca/2012/08/top-10-signs-your-business-is-not-vc-fundable/

Lumo doesn’t have traction yet, because it isn’t for sale yet. It’s not for sale because we need funding to produce it. We know people want it, but we don’t know how many people want it yet. Crowdfunding, in our case, is a great way to allow our market to tell us what they want in terms of features and price point, without the risk of spending hundreds of thousands of dollars producing a bunch of Lumos first.

Having said that, crowdfunding is not promotion. In order to run a successful crowdfunding campaign, you need to do the promotion ahead of time. We learned that when our first attempt on Kickstarter failed epically.

We did Kickstarter in September 2013 with a very very early stage prototype and no marketing. It still raised around $25,000, but it wasn’t enough to move the project forward, so we regrouped and joined a 4 month incubator, visited China, and hired some engineers.

We’re now launching on Indiegogo for two reasons. 1) they have a partnership with the hardware incubator we attended, so we got a lot of support regarding pre-campaign prep and marketing for our upcoming launch (we couldn’t even get a contact email from Kickstarter) and 2) The flexible funding option makes sense for us right now. We can make 10 Lumos or we can make 10,000 Lumos, depending on market demand. We don’t have to meet our goal to move forward. That wasn’t the case in 2013.

The first campaign had no budget. In total we’ve spent around $5000 in marketing activities this time. This includes attending SXSW, running facebook ads, and running a contest using a tool called Gleam.

The first campaign, on Kickstarter, wasn’t nearly far enough along. In retrospect I would have waited until we had a prototype that was only a few steps from DFM (design for manufacturing). We have that now.

More importantly, though, I wish I’d spent a year reaching out to people and building a community before launch. Having a strong, supportive community is as important as having a solid prototype.

The first campaign was a one-person show. I had some help making a few games and shooting the video, but overall the whole thing was my personal learning experience. This time we have a delegation process. Someone is in charge of the video. Someone else is in charge of design. I am in charge of PR and marketing, and the developers can focus on making the thing work.

What tools did you use to market your campaign?

I only used social media and local news coverage on my last launch. We managed to get a big spread story in the Globe and Mail that went out a week before our campaign went live.

This year I used Gleam, Thunderclap, fb ads, and attended a pile of events and conferences. I also believe in old-school hustle, so I invite parents and families in the Los Angeles area to come hang out with me and play with Lumo. The best way to build supporters is to actually show them your product and meet them in person, I find.

What was your biggest challenge during your campaign? What could you have done differently?

The biggest challenge with the Kickstarter was exposure. We also didn’t really know what our marketing message was at that point.

I think the biggest challenge on the upcoming campaign will be keeping up with correspondence. We are already getting tons of calls and emails, and there’s really only two people on hand to answer them.

We have a list of over 30 people on standby to help us if we need them.

In retrospect what were your best assets for running your original campaign? Since you’re launching another campaign soon, how do you plan to apply these lessons this time?

The best thing we did with our original campaign was saving the email list and keeping up with the original community. They are our biggest advocates, since they know how far we’ve come.

Keep a very open mind, spend as much time as possible building an email list, and don’t be afraid to ask for help. You are about to ask hundreds of strangers for their money. You should get used to defending yourself in the nicest possible way, which means you will have to talk to hundreds of people before you launch to get your messaging and language right.

If your campaign isn’t going well, shut it down and try again later. If you let it run it’s course and fail, you will have a dead skeleton of a kickstarter haunting the interwebz for all eternity (like we do). It’s totally okay to shut down early, regroup, and try again. Your community will understand. They want you to succeed.