Spent all of yesterday recovering from #NuitBlancheWinnipeg on Saturday night; more on that later when the photos go up.

Sundays are best spent lying around, not getting dressed, sleeping lots, getting cuddles and watching shitty movies.

Our movie of choice was Logan's Run which is one of those terrible-but-awesome sci-fi movies from the 70's. It also features the worst robot ever and Farrah Fawcett!

Have you ever noticed that futuristic clothes from 70's movies have a kind of Greek feel to them? Except the earth-tone onseies from that Star Trek movie. Weird.

Ty was impressed I sat through the whole cheesy, terrible thing, but after devoting over an hour of my time to it I felt like I had to see it through. Not only does my wonderful man let me use his silent apartment as a study space while he goes out and is his cool visual artist self at shows, he also leaves me tasty snacks!

He's a keeper, this one.

Spent my night with my Intro Soc text and sushi snacks, five hours and several recorded lectures later I am in bed with a beer and I couldn't be happier.

Gotta be up early for brekkie with Jabez tomorrow.

All fathers, all raped Cheers for beers with Tears for Fears.

Tonight I am at Ty's and he made pork chops with mushroom gravy and perigees for dinner; it was nice because I haven't had a decent meal all week, just on-the-go cooked-then-reheated nonsense and two beers later I'm right as rain.

Had to turn down a really cool project today; Jeremy from Astron-6 offered me an audition for a bit part in their upcoming epic slasher "Father's Day" which I am beyond excited for. Sadly for your heroine my jam-packed sched of school, studying and two jobs doesn't really give me room for any side-projects right now; not three weeks into school, things are still a bit of a clusterfuck and I just... can't. Putting anything more on my plate right now makes me want to hyperventilate a bit. I am genuinely heartbroken, I wanted to be involved in this project so badly.

That being said, scope out the newest trailer for the flick. Seriously. I am SUPER STOKED for this and am positive that this is going to be the first of many slick-as-hell films from them, and I look forward to seeing what they come up with in the future.

(oh yeah, it has a bunch of gore and titties in it. But watch it anyway, don't be a pussy)

Local kick-ass flicks aside, yr girl is really looking forward to Culture Days this weekend and Nuit Blanche on Saturday at the WAG. Mrghosty is doing a show from midnight onward so check out his latest, I know he's been putting some late-nights into his show. It's going to be a fabulous evening, I can't wait!
Tags: Uncategorized
Tweet

At the halfway house

As evidenced by this Rough O'clock picture below: Myself, @Defessus, and @DJBerbs at The Academy on Saturday night.

In which I went out for dinner and had a steak I couldn't really afford but was the best thing ever, a daquiri that was too icy to drink through the straw like a lady so I slurped it, harassed Jabez into coming out, consumed a shit-ton of home-made (super strong) wine, and went to a lounge and didn't pay for a single drink all night because my usual drink-getter was out camping with the boys. Jag, Jag, Jag, gag. Shots will be the death of me. No wonder I was exhausted on Sunday and spent it cuddling with my couch.

Boss today asked me if I'd like more hours at the office and I had to turn her down; I'm puttin' in 30+ hrs a week of work, plus classes, plus studying... I fail at being sociable, having money, and blogging enough as it is already, I don't know where I'd fit in more time to not be able to do any of those things?

I could use the dolla-dolla billz, though...

Ty has me listening nonstop to Beck (more so than usual) and I'm stuck on this song off Midnight Vultures:

My longest (12+hr) day of the week is almost complete! Tomorrow is a cakewalk, Friday is downtime, Saturday is Nuit Blanche. Are you going?
Tags: Uncategorized
Tweet

I'm under lock and key Hanging out at Cafe Bodhi before class; got here super early to print out my essay and am chill in' hard with my giant french-pressed (from home!) coffee and what I think is Kings of Leon blasting from the speakers above me.

My fav prof whom I've never met just sat down, do I say hi? I'm taking his class online and it's beyond good, he's a total Communist (seriously!) and waiting for new classes to be posted is like waiting for the newest episode ofMad Men to air.

Sadly he's not handsome like Jon Hamm, but that's probably for the best, right?

Adventures abound, just no time (and lousy school wifi bandwidth) to write about them right now!

I'm stranded with nothing Caturday.
Heading home soon; gotta get groceries and study before Connor and Berb's birthday dinner at Rae & Jerry's tonight.
Gonna buy a steak dinner I can't afford, ch'yeah. But how often do birthdays or trips to the best steakhouse in town happen, really?
Ty's off to MANfest camping with his buddies tonight; it'll be weird going out without my partner-in-crime tonight but sort of liberating, I think. I like flying solo sometimes and I think it'll be good for both of us to come back with our own ridiculous stories after the weekend.
Last night we checked out "Get Low" at the Globe Cinema; I love that theatre so much. When Memoirs of a Geisha came out a few years back they had a sake and sushi pre-party that I attended with a friend of mine. There were girls dressed up like geisha and traditional Japanese music in the lobby. I wish I'd blogged back then so I could have shared it.
Anyway, Get Low. It was good; touching at times, dark at others. Honestly the reviews I'd read basically said "it's got Robert Duvall and Bill Murray in it, so it's good", and that's true. Maybe not a moviegoing experience, but definitely a Netflix/download/rental. If only because Bill Murray is the best actor ever.
Gotta jet, lots of things to do today before dinner and drinks afterward!
Enjoy your Saturday loves, xo.
Tags: Uncategorized
Tweet 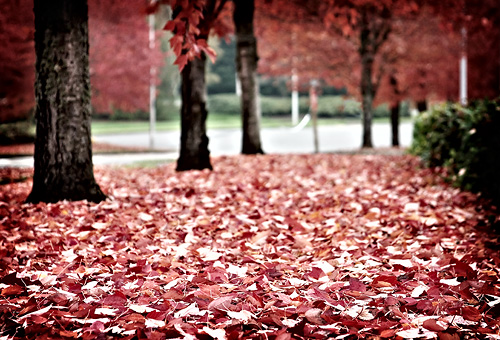 It's Fall and I love it; leggings and boots, giant scarves and jean jackets,

(all of which I happen to be wearing today...)

Okay so maybe it looks windy and raining outside from where I am perched with my books and iPad and fancy organic apple juice but I don't mind; this time of year inspires me and I've never been able to figure out why. I'm so glad my classes started in my favourite season, it helps the creative process, I think.

After my Intro Econ. Theory class this dude from my class and I had a bonding experience over Apple: he taught in Cali for a summer and found out that, apparently, employees try to avoid being caught in an elevator with Steve Jobs because that means they have 30 seconds to prove they're worth keeping on the payroll.

Is this true? Does anyone know? It sounds far-fetched but let's face it, Jobs is a bit far-fetched himself.

I could see it being true, honestly. I hope it is.

We discussed brand democratization, Twitter as the forefront of news and information, and the impending threat against Net Neutrality. I'm basically on a high from it, the only people that every know what the heck I am talking about are Screetus and Ty so finding like-minded people was a welcome surprise.

As he, another girl in my class and I waited in line at Cafe Bodhi for our fancy drinks and talked about how marketing slogans impact our everyday vocabulary I couldn't stop smiling and thinking "yes, this is what I came here for" and it made me excited about everything that's to come.

I just want to sing a song with you Watched my first Video on Demand class today; thankfully my prof is a total jerk and really compelling to listen to, so I only occasionally check Twitter while listening to the lecture.
Still have to buy my books, though. Damn.
Worked my first shift at my other job today; from one finance office to another, and the other job in the studio which feels less like work than any part-time job I've ever had before.
We all take what we do seriously, but none of us take ourselves or each other seriously. Plus working with a crew consisting of all-men is a nice change from the hen house of Last Job.
I need to read more Wuthering Heights, I need to start reading my Intro Soc. textbook.
I need to sleep more and eat better and hit the gym more often.
I need to stop worrying about things I can't change and focus on the important things.
It's hard not to sometimes, though.
Working on it.
Tags: Uncategorized
Tweet

Last night Arts for All threw a bash that took up half of Broadway, so myself and Boyfriend Supreme headed down to check out the madness. There were rowdy dudes in suits playing covers. A huge main stage where the mayor didn't kick anyone in the face made a speech. We got cute candle cups to carry around. We drank wine and tasted cheese and ran into friends. Ate mini doughnuts by the median. Scoped out veggies from a farmer's market stand. And picked which entry in the light installation in the trees contest we liked best. I think this one will be the winner.
Tags: Uncategorized
Tweet

Run for your children, for your sisters and brothers This guy is sitting next to me and I keep checking out his crazy hair; it looks like it's on backwards.

They're talking about a "crazy-intense reality show" one of them heard about where "a bunch of teenage dudes" walk and walk until there's only one left and the last one get whatever he wants.

"They, like, die if they stop walking, dude" says his friend,

I can't bring myself to interject and tell them they're actually talking about The Long Walk by Stephen King because their earnest excitement over this subject is just too entertaining, honestly.
Tags: Uncategorized
Tweet