Living With the Mean Reds 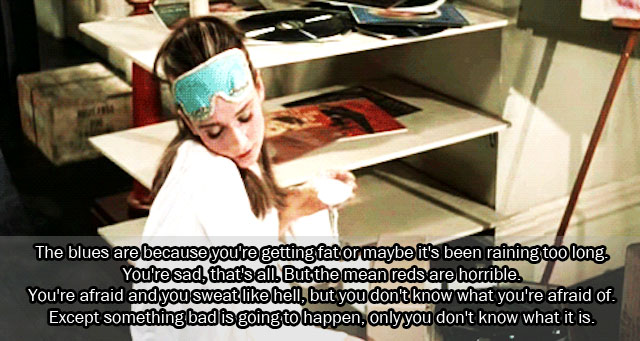 I remember the first time I heard Audrey Hepburn utter those words. I was sitting with a friend, watching Breakfast at Tiffany's for the first time, and I started to cry.

I felt relief. Relief that I finally had a way to describe what the stressful, overwhelming, terrifying emotional state that frequently overtook me.

Let me tell you a little more about what living with anxiety is like:

It's trying to write this post. Over and over and over again and deleting it all because as I see the words forming on the screen and my head starts to swim and my heart starts to pound and I think

You're so stupid. Nobody wants to hear what you have to say.

Or being so ashamed of my story, of how I found myself fighting this almost-daily battle against myself that I I spend more time trying to breathe deeply and fight back my tears than actually typing anything at all.

I wrote a huge post, earlier. About how my anxiety led me to my suicide attempt at 16, about the ways in which my relationship with my mother has left cracks the size of the Grand Canyon in my self-esteem, about how I've struggled with feelings of guilt, fear and, most importantly, of worthlessness for as long as I can remember, and you know what I kept thinking while I was pouring my heart out?

Nobody wants to hear your stupid thoughts. They're going to think you're an idiot for even thinking that they're worth sharing. You're not good enough to talk about your anxiety when there are other people out there who have it so much worse.

That's what living with anxiety is like. I spend my days second-guessing everything I've said, everything everyone has said to me, and worrying that somehow, some way, I'm going to ruin everything for myself and everyone. It will all be my fault.

I've been this way for as long as I can remember. Due to a seriously abusive relationship with my mother and being a member of a family unit that operates on guilt and negativity I've developed this tendency to always assume that I'm not good enough.

Every single memory, every interaction, every milestone, is peppered with moments where my chest clenches up and I feel tears welling up behind my eyelids.

Did I just say something stupid? Oh my god they must think that I'm such an idiot.

Do I even deserve to be here? I'm such a fraud, I'm a sad excuse for a person and once they figure it out I'll lose everything I've worked so hard for.

Does he really love me? Because I certainly don't deserve to be loved. I'm too stupid and worthless and too much of a burden for anyone to want to love me.

People tell me I'm strong. They tell me that I'm smart, that I'm motivated, that I'm able to do anything that I put my mind to. I have a list of accomplishments as long as my arm that I'm so fiercely proud of, yet there's a voice screaming in my ear that I'm a fraud.

That I'm a stupid, worthless fraud.

Believe me, I realize how irrational this sounds, but anxiety isn't rational.

Some days I feel like I can't manage. The vice grip on my chest becomes too strong and I can't hold back the tears and I hide in a bathroom, or behind my sunglasses, or best of all under my blankets where I can just disappear until the feelings fade enough that I can try to put on a brave face and pretend like I'm okay again.

Most of the time I'm just pretending. Pretending that I feel at ease, that there isn't a perpetual knot in my chest, that I'm not worried that someone will wake up and go "aha! You never deserved any of this, you awful, terrible, worthless person!"

But pretending only goes so far.

Talking helps. Talking, crying, screaming it out helps. I'm slowly learning to accept that I don't have to be ashamed of having a mental illness, or that it's only a very small part of what makes me "me" but there are hard times, and I never know when it will strike.

But I'm getting better. I wrote this post, even though it took me several hours, a lot of tears, frantic text-messages to get reassurance that yes it is okay to talk about this on the internet of all places and no, nobody is going to think I'm stupid for feeling this way.

Let me repeat (both for me and for you): nobody thinks you are stupid for feeling the way that you do. Your feelings are always valid, no matter how irrational they may seem or how often that voice in your head tells you they aren't. You have value.

I have a long way to go before I'm able to rid myself of the Mean Reds, and maybe I'll never get to a point where they're 100% gone, but I'm going to get better.

There's no shame in reaching out. Together we can beat the Mean Reds.

(I wrote this post for #BellLetsTalk, a hugely important campaign which encourages open discussion to end the stigma surrounding mental illness. If you know someone that you think might be suffering from mental illness, please reach out the them and let them know that they are loved & supported.)