Regarding that double-suicide in Etobicoke

I wonder if I would do it, if it were me.

As morbid as it is I've thought about suicide a few times -not in the immediate future, but what it would mean for me as someone who will get old and whose body won't always be kinda nice to look at kinda work the way that it's supposed to.

It also makes me think about what it would mean for other people, and why they would make that decision.

It also makes me think about how we, as a society, view suicide.

It bugs me that most people look at it as something that only fucked-up people do. Remember that guy Martin Manley from a few months back who took his own life and put up a website about it? I read a mirror of the site when the news exploded and he seemed like a pretty level-headed guy. He knew what he was doing. But still we had (have?) this urge to paint everyone with the same brush because it's easy -I remember reading boatloads of comments about how he just had to be fucked in the head to even consider suicide as a viable option.

That doesn't make it brave, or noble, or any of that shit. But I don't think it makes it cowardly, or selfish, or any of the other things people call it, either.

It's just a thing that some people do that makes us sad.

Mostly because our society doesn't really give us the tools to cope with it. We see it as some sort of giving up, as rejection of life, which is something that we should always want.

But we don't always want it, and we shouldn't always have to.

It's fucked up, but by and large that's how life is.

case in point, the alex jones aka the crazy person who was on CNN a few days ago yelling at Piers Morgan and then posted an even crazier video afterwards about how he thought he was being followed and going to be murdered by crackheads.

or something like that, I only read the huffpo article in brief because I can't handle listen to peeps who talk say stuff like that. people who believe that chemtrails are bad and that there's a secret gov't conspiracy for everything just blow my mind.

like yeah, the gov't is probably orchestrating a lot of stuff behind yr back, but it's the gov't and they've been doing that since the time when they were first established. thing is, the stuff they're orchestrating probably isn't the stuff you're raving about on your youtube channel or on yr radio show which is apparently really popular?

which just goes to show that people will listen to anything as long as it's radical and scary.

which will be the greatest prank in recent history. 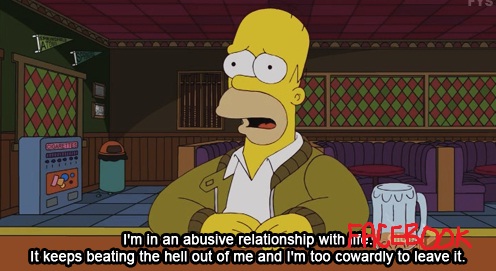 what was once a great user experience that connected us with everyone we had ever known and every single new person we met that (I'll admit) revolutionized the way we interact online, this relationship is going downhill and we need to face facts: it's just not good for us any more.

it changes our privacy and sharing options constantly (and resets them at random). it suggests weird and sometimes offensive ads based on what people in our feed say. it crashes (often). it's slow. it's become less about networking and sharing and more about ad revenue based on flash-based games and ads inserted into our news feeds. the only thing it is good at (event management) has fallen by the wayside so much that it's barely even worthwhile to use when there are third-party sites like MeetUp.com out there.

and now facebook is going to be bringing videos to our already overly-cluttered networking experience.

and it does all of this so blatantly, flying in the face of a positive user experience. nobody wants to deal with ads or videos or intrusive weird privacy policies that we constantly have to police and re-correct to the way we want them, but the people behind facebook do it anyway because profit is more important than respecting the people who made your site what it is in the first place.

as a user of multiple social networking sites, this hits me like a drunken smack to the jaw. none of my other beloved sites would treat me this way! why am I letting facebook get away with it? why are we?!

because we're stuck in an abusive relationship with it. it's safe, it's easy, we can go back whenever we want and even though sometimes we get frustrated and upset with it, and it does things that hurt us (like completely disregard our user experience), at the end of the day we feel like we can't do any better.

which is the very definition of being in an abusive relationship.