And sometimes makes me with I'd stayed at home like this: But working it in with my regular workouts is making me feel like I can take on the world. 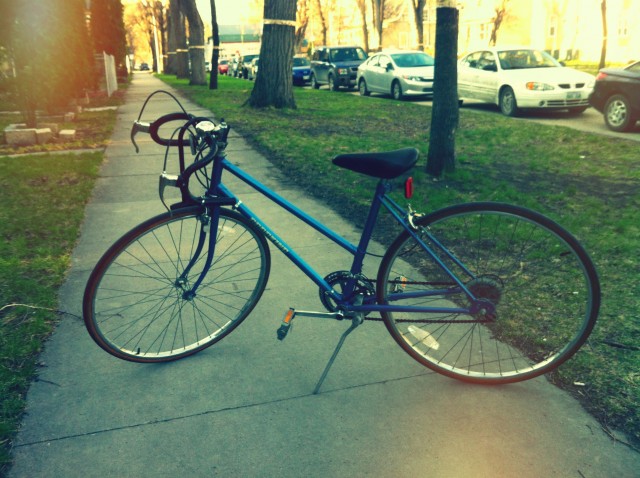 The new lady in my life.

She's the replacement to my other bike, the love of my life, Vikki, who was the other half to Vance, Tyrone's bike. They matched and were his & hers and it was wonderful until I got hit by some woman in an SUV who pulled out of a back lane looking at traffic going the other way (she wanted to cross the street and turn) at the end of last summer.

It was horrible and I was heartbroken. I missed my bike.

I took her out for a nice, solid 16km ride this evening and I'm happy to report she rides like a dream.

It's going to be such a good summer, it's making me a bit emotional to think about.

we all need a little tough love sometimes

I need to go for a run

and don't fool yourself I'm not a dainty runner or even a dainty woman in general. I'm a clutz and a spaz and when I hit that treadmill if I'm not panting and red in the face and sweat isn't dripping into my eyes and the only thing I can focus on right then is pacing my breath and moving my arms then why the hell am I there anyway.

it's funny to say that because I don't think of myself as a Runner but lately it's the only way I can clear my head and stop worrying about something, everything and just be.

two years ago I couldn't even run on the treadmill, or at all. my boobs were too big and it hurt my back/chest/everything to even attempt to sprint like I used to when I was younger but thanks to universal healthcare my newer, smaller, better boobs have allowed me to become this running-obsessed monster. thanks modern medicine.

if I could go every day I would but I'm just too damn busy. life and school and work and homework piles up on me and honestly guys the only time when I feel like I'm not being crushed under the weight of responsibility is that 3-4 times a week when I can escape and let go.

last week I was sick and I only went once. I pushed myself for 15 mins and nearly 2 miles but I was so stuffed-up I could barely breathe and I felt like I was going to pass out or throw up or both and I dragged my sorry ass home in the rain, unfulfilled and under the weather.

today after work and class and a meeting with classmates to talk about a project that could eat up the entirety of my evening I'm going on that treadmill if it kills me. even if I have to stay up till midnight doing schoolwork after.

I haven't been feeling like myself and I don't know wtf is up.

I need a good run to sort myself out.
Tags: Exercise Uncategorized
Tweet